"Here, take my hand, I'll help you up."
—Damien to Player's Character at the freshman initiation

Damien is one of the five characters the hero(ine) can date in either Magical Diary: Horse Hall or Magical Diary: Wolf Hall. He is a senior student from Falcon hall. In Horse Hall, if the heroine agrees to complete the initiation, he becomes her senior, and this launches his path.

As his 'parents' are human and he is not, there is some question about his actual family. His parents stopped coming to visit the school after his first year, and no one's been able to find out more.

He's well known in the academy for leaving many girls weeping in the girl's bathroom for a good amount of years, and is disliked by much of the student population for many reasons. Was apparently the victim of bullying and fistfights during his first year of school.

He is not at all shy about the fact that he has had sex before, and will openly tell the player character that he is not ashamed of all the people he has been with. He used to date Angela, before she publicly broke up with him, which she will gleefully tell you when she sees you on a date with him later on in the school year. He also briefly dated Musette before she was expelled from the academy, although he couldn't tell you why she was expelled.

He gives off a rather mysterious vibe, or so the player's Character says in her diary. He delivers many warnings to be careful, that it's dangerous in Iris Academy, and that the teachers can't be trusted - but only in a very enigmatic way.

According to William he never goes out on school field trips, and doesn't take part in any clubs. He seems to spend most of his time flirting with girls.

He is a charismatic and talented actor all in all.

He's a talented wizard, and also has some secret knowledge of the Otherworld and magical rituals.

How to date him (tips and spoilers)[]

Damien makes for an interesting challenge in dating. His path is the easiest to start, but it's also the easiest to break. And a lot of Damien events override those of others. He's also unique in that he has no "just friends" scenario: You either have to be dating him, or you have to break it off with him completely. 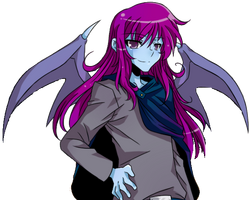