"Good Morning, everyone! My name is William Danson, and I am your incoming senior class president."
—William at the freshman initiation

William is the brother of Virginia and Donald, as well the Senior class president. He is not a Romance Option for the Horse Hall PC, though he is for the Wolf Hall PC.

William Danson is the eldest of the Danson siblings, and usually has to clean up the mess that Donald makes with his pranks and help Virginia with various things. He's her favorite brother, and he takes good care of her because he remembers what happened when she was still a baby. He used to date Angela, but (according to Virginia) after breaking off their relationship he's sworn off women. Regardless, as his sister's roommates, you and Ellen don't have a chance of dating him in-game.

He's a very skilled magician, able to tightly control a tiny ball floating in midair with his magic as well as taking part in a fire dancing ceremony later in the year. He was elected President of the junior class in the year before you came to the school. He's responsible, skilled and talented with magic, smart and kind. He owns a wand, and will help whoever chooses to run for Treasurer. 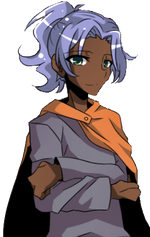